Today's Picks Who Is
Click Here to Buy Picks

Who is Steve Budin

To be alerted when my Video is live, subscribe to my Video on YouTube.
You can do so by clicking on this link:
https://www.youtube.com/channel/UCK0rVqKBbu7BBdpZX-KufGw 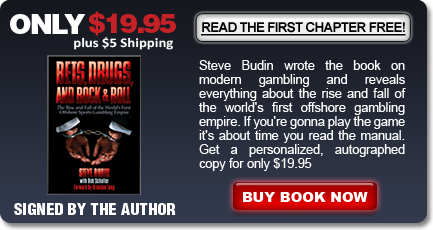 CALI-CARTEL
50 DIME
NBA SUNDAY NIGHT BAILOUT
Indiana at Portland at 9:05 Eastern
64-44 NBA Roll past 5 seasons
Matches their 50 Dime Winners
on the 49ers over Green Bay and the
Packers over Seattle the past two Sundays
Matches two Monday's ago 50 Dime
Winner on LSU over Clemson
Buy Now
$99

Today I turn to the Cali-Cartel for their 50 Dime NBA Sunday Night Bailout Lock on Indiana at Portland that tips off at 9:05 Eastern. They enter the day on a 64-44 NBA roll over the past five seasons combined.

This play matches their consecutive 50 Dime NFL Playoff Winners the past two Sundays on the 49ers over Green Bay in the NFC Championship game and the Packers over Seattle in the NFC Divisional Round that I also brought you.

It also matches two Mondays ago 50 Dime Winner on LSU over Clemson in the National Championship game.

They closed the baseball season on a 20-7 roll with 50-Dime MLB releases this summer and this play is just as strong. I brought them all to you and you got them all for at least Half Price Off.

The Cali-Cartel is a group out of the Silicon Valley area comprised of former computer guys-turned-bettors that I've followed the past 6+ years.

As I made clear at the top of this page, I am NOT a handicapper. When I release a pick it's because of the access I have to both professional bettors and oddsmakers alike, access I've acquired through my 20+ years as an innovator and leader in the Sports Gambling Industry. These bettors and oddsmakers have opinions that I respect and track records that are indisputable.

Please refer to my Rating System below for a full explanation

of how I acquire plays and how they are rated

Now listen guys, I want to make something 100% perfectly clear to you: My contacts - the professional bettors and oddsmakers I've know for 20+ years - win far more than they lose, but they're not infallible. However, and this is important, unlike you, the general gambling public, they make their living doing this, and they do it successfully because they win more often than not and that's why when I get word of a big play, I'm releasing it right here.

FYI - What you are about to purchase is just the pick. No analysis because as I said above, I am NOT a handicapper.

(Any "Guarantee" applying to

Free Service is NOT included)

As explained above, my special releases come from various sources around the country. They could be from friends of mine out ofNew YorkorSt Louisthat I am following closely at that moment. They could be from an oddsmaker offshore whose line is different than the global line. They could even be from a Vegas "streak bettor" whose opinion is running hot. What they won't be is a guess, or a shot in the dark based on nothing more than hope and a prayer!

I will be coming with special releases on those days when I feel I've got the right source at the right time. Now that source will not always be the same, but if I find a certain source that gets hot, I will ride them non-stop. Because of these mitigating factors, factors that can sway the size of my enthusiasm, it's imperative that I institute a strict rating system. Failing to do so would be suicidal to my clients. Plus, I wouldn’t be fully earning the premium I charge for my special releases if I didn’t hold your hand the entire process and extend you the complete service you deserve from me.

The maximum rating is called a 100 Dime “play”. This does not represent a specific dollar amount, just the highest rated selection I release.

The minimum rating is called a 10 dime “play”. This does not represent a specific dollar amount, just the lowest rated selection I release.

Who Is Steve Budin?

You could say I was born into this business; being the son of a legendary New York bookmaker it's not like the apple fell far from the tree. I had no use for flash cards as a child; parlay cards were my calling at an early age.

By the age of 16 I was already taking bets from classmates, their parents, and my teachers. After graduation I went to work for Caesar's Palace running high-roller gambling excursions to Vegas and Atlantic City, plying whales and the filthy rich with the best hookers and drugs money could buy, all the while watching casinos make small fortunes on their losses.

In 1994, I had a vision that changed, re-shaped and created the sports gambling industry as we know it today. It was then I moved to Panama and opened the world's first international offshore sportsbook, SDB Global, which I eventually relocated to Costa Rica.

Yes, it was me who had the vision to give bettors a choice of dealing with a legitimate corporation taking their wagers via telephone rather than dealing with Joe Blow on the local corner. Call me the father of the modern offshore sports gambling industry. And for changing the way 99% of you reading this now place your bets, I had to deal with corrupt foreign government officials and shady so-called businessmen.

I became a self-made millionaire by the age of 30, but my reign as the offshore gambling world czar was ended courtesy of the United States government, who arrested me and forever changed the status of the entire offshore Industry from Grey to Black and White.

Why me? Because the U.S. wanted to take out the biggest fish in the industry. But like prohibition efforts in the 30's, their efforts were in vain because all they did was send 30,000 active bettors looking for other offshore sportsbooks. In fact, the week I was busted and forced to close, 25 new companies opened up offshore. How ironic, right?

Was I down? Certainly. Was I out? Never. Remember, I grew up in the gambling world. The Internet was just coming of age. I decided to hop to the other side of the fence and in partnership with Al DeMarco create and build SportsInfo.com, the Internet's largest pay-per-view sports handicapping conglomerate.

Enough about me; the book about my rise and fall in the sports gambling world, "Bets, Drugs, And Rock & Roll" is available at Amazon.com. What you need to know for now is that no one in this industry can give you the perspective that I can when it comes to the handicapping and the sports information world.